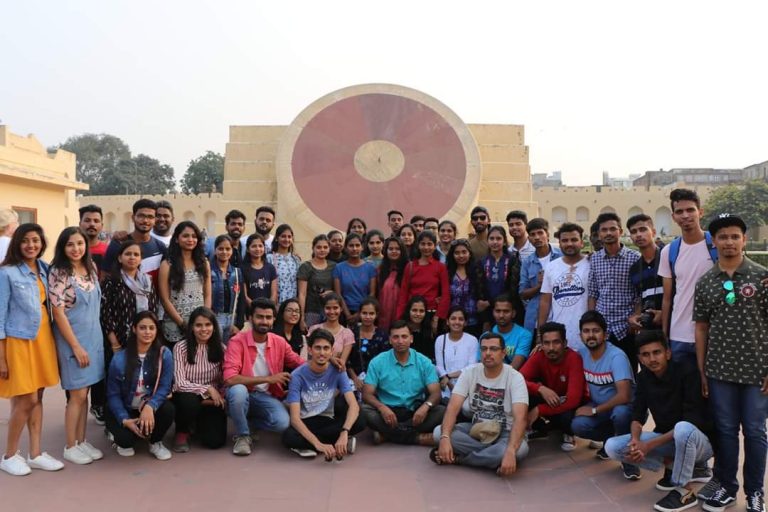 As part of value addition to the academic curriculum the Department of MBA had organized an industrial tour for the 2nd year MBA students to Mewad region of Rajasthan covering Jaipur, Udaipur and Chittorgarh.

The objective of the study tour was to relate the theoretical concepts of the class room to the practical business world, also to understand the cultural heritage of Rajasthan, the concept of service marketing and costing in hospitability industry and the concept of production planning in a manufacturing firm.

Accordingly students visited Jaipur City Palace, Amber Fort, Jal Mahal and Hawa Mahal where,  they were explained about the history and the cultural heritage of these locations. The students also visited Jantar-Mantar – the astronomical observatory of ancient India built Raja Jaysingh, which stands as testimony even today that reveals about the scientific temperament of India during the ancient times. The students were fortunate enough to witness the demonstration of actual calculation shown in the observatory.

The students had a great chance to relish the un-forgetful and mesmerizing experience of city Palace of Udaipur – built by Udaisingh followed by Jag Mandir, Fateh Sagar lake and Lake Pichola.  Further a visit to Maharana Pratap Memorial revealed about the courage and sacrifice of the Rajput warriors and details regarding the battle of Haldighati. An industrial visits to was also carried out at PMP Auto Builders. The students were explained about the different manufacturing processes involved in the Auto Building of coaches by abiding the international standards of safety and comfort. It was revealed during the discussion that the company specializes in non standard designs for auto bodybuilding of Bus coaches, caravans specialized dubble decker tourist couches. The manager explained about the different process involved in material procurement (domestic and international), production planning and dynamic costing method practiced in the firm. Later the students are escorted in the shop floor to see the actual process involved.